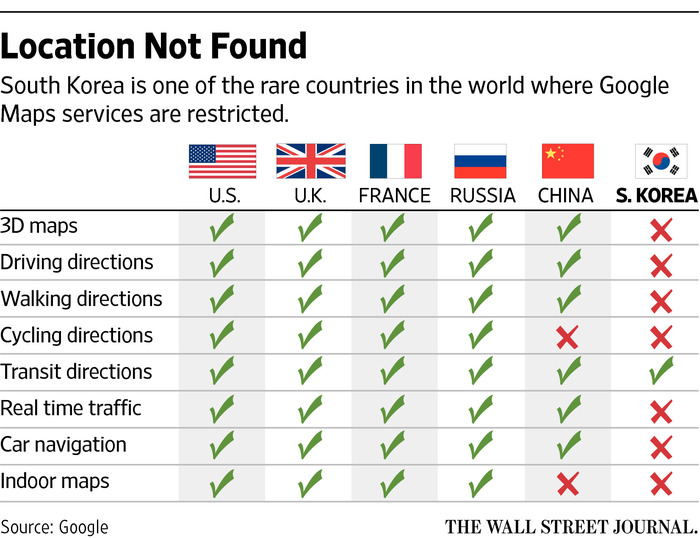 Of all the countries whose maps are available through Google Maps, South Korea is one of the countries for which you would not be able to see mapping data.

Just like always both the north and the south of courier have been known for the conservative attitude towards other countries and have been known for their word like state. Although Google has not relative leave next South Korea in anyway comma it has still refused to handover is mapping data to Google in the past. However back in May South Korea conceded to the request of Google to provide its mapping data to the technical giant.

This came as a good source of news for Google and they felt like a huge obstacle had been crossed. But they were not really aware of the fact that South Korea was still hesitant in handing over the mapping details to the world. The country had promised to have the data delivered to Google by August 24th 2016 but now they have announced that they would take 3 months time to decide on how to proceed regarding the matter. This unexpected push back by 3 months was not expected by Google at all.

When it comes to making decisions about opening up to the world, the South Korean Government is always extra careful. They have mentioned that they would need more time to discuss comma and allies and then come up with a proper answer to Google. Google representative in South Korea has been completely focus and have been trying hard to get something out of the government officials in terms of cooperation but have only bitten the dust so far.

In the past when the Google mapping service request was extended to South Korea it was immediately turned down because the government had felt that showing the map of South Korea to the world could put the whole country in danger. Come to think of it, this is not exactly and incorrect idea. It is possible that with the help of the maths to your country any antisocial element could find it easy to bring about Anarchy and discontent among the people and cause troubles.

On an interesting note, when Google blamed South Korea for causing it to fall behind others in terms of competition in mapping services, Korea fair trade Commission on the other hand went ahead and blame the Google for why only thing the anti competition laws in the country. A formal investigation has been called again this and Google will be under the scrutiny of the South Korean Agencies for quite some time.