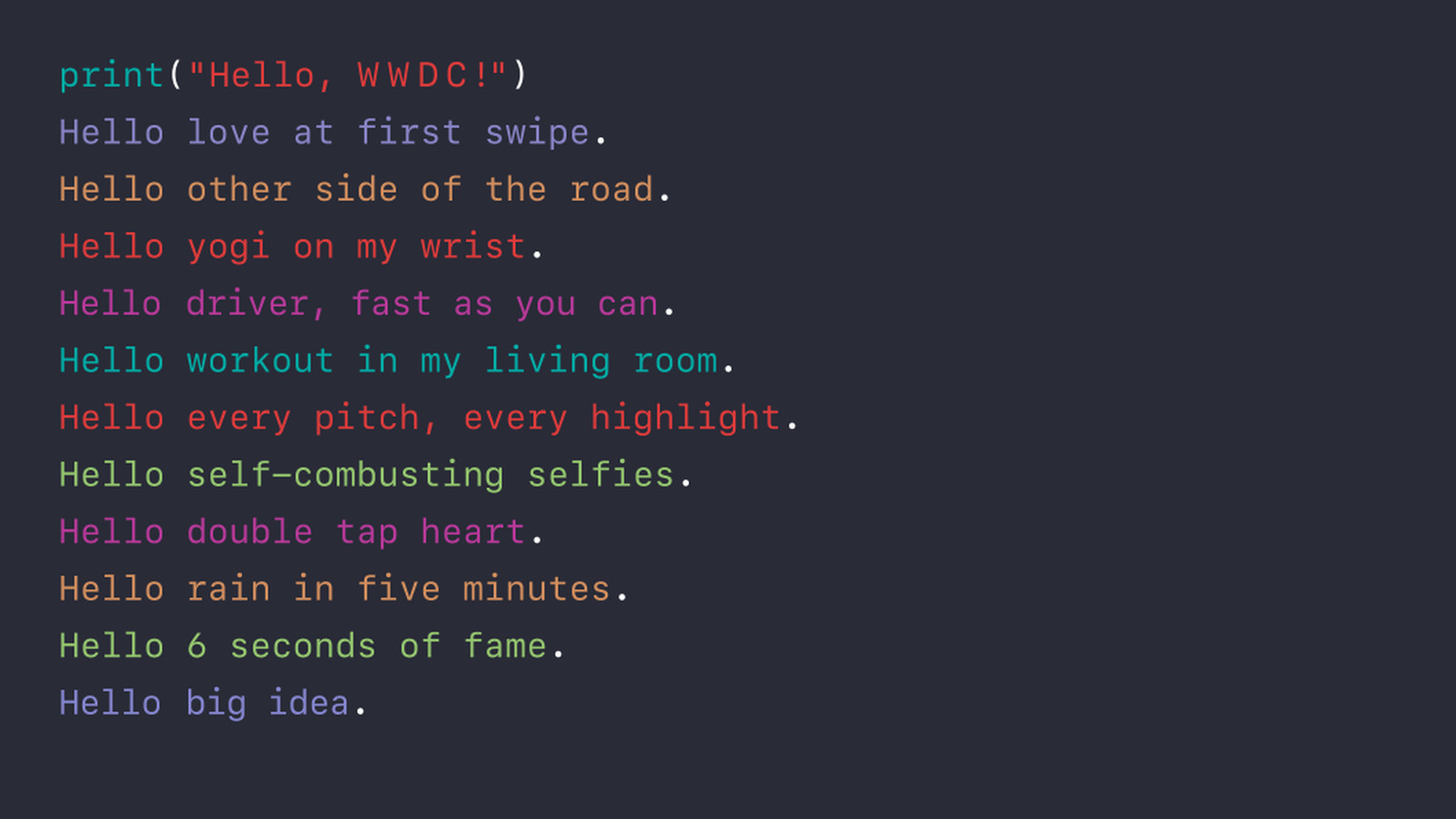 The WWDC 2016 is round the corner and Apple has already started informing peoples of it arrival. Every year in the worldwide developers conference April comes up with the new way of attracting the attention of people across the globe. It uses this platforms to invite as many developers and Tech expert as possible in order to showcase its products so that it can gain a better sales figure when the product is launched. This year as well Apple is going to follow the same drill but the way in which the people have been approached is quite interesting.

Tech Geeks  Around The World are of the view that the kind of advertisements that Apple has made for the WWDC is actually consisting of a secret message. We are not talking about a secret message relating to alien contact or hidden cults, but its Idea behind using a new language known as swift. This message written in this new language has been considered by geek as a way of highlighting what successful applications and new features may be brought about in this program.

Some of the most important applications that have been highlighted in this message at Indore, crossy Road, Uber,, MLB at bat, Instagram and Snapchat.

All the attention, however is all the attention, however is attracted by XI a line in the message. XI 9 as you can see in the picture above, is labelled as hello Big Idea. This message has been translated by Tech experts as the possibilities of changing from OS X to OS XI. The world being would definitely means that the new changes that would be brought about in the latest version of OS X would be quite different from what we have been seeing all these days on Mac.

On the other hand, it is also possible that Apple really does not mean anything. It may only be trying to raise our curiosity to a levels that we all attend the worldwide developers conference 2016. The reality is that Apple has its own technique of having more and more people attended developers conference and this has yielded good results for it in terms of sales.

WhatsApp for OSX has not been created yet.

The application is now restricted only to Android, iOS, Windows Phone, BlackBerry, Symbian and Nokia S40.

However, OS X users needs be disheartened; a new alternative to WhatsApp, called WhatsMac can take care of all the internet communication needs for them.

Sending files however, requires you to drag and drop files to the application as uploading the file does not work here through WKWebView. Chatting with friends is an easy work here though; you will hardly feel a difference from the original Version of WhatsApp.

WhatsMac can be used only if you have a WhatsApp account. So if you do not have one, the first step would be to create an account using someeone’s phone or your own and get the account verified.

The next step is to download the WhatsMac application from Github and run it, whilst another application, Gatekeeper, is enabled. At this point, you can simply right click the app icon and click on Open, and see the application get executed successfully on the OS X device.

This acts as a sort of replacement for Whatsapp web that cannot be accessed by iOS devices. The application can be used effectively if you use your phone and scan the QR code.

The iOS app of WhatsApp does not have support for QR code scanning and requires you to use an Android or Blackberry device for the same.

WhatsMac is currently compatible with OSX 10.10 Yosemite. Media messages cannot be recorded with the application, even if you have the settings right for the camera and the microphone.

Voice calls are also a distant dream, but if the application really gains popularity, developers might introduce the same here as well.

After Windows 8 failed to receive the same response as Windows 7 had done, it came up with the Windows 10, a beta version of which is currently available.

The official version is expected down the line in 2015. Windows 10 like other Windows operating systems can be installed on most PCs and laptops other than the MacBook from Apple.

The same however, cannot be said about the Mac OS X Yosemite, which is the latest OS from Apple.

With the passage of time, Windows as an OS has grown in terms of features and performance.

This growth, when noted over a period of twenty years has always followed an upward trend.

The obsolete versions of windows that used to power the older PCs with lower configurations sufficed back then.

However, with high end devices now coming into the picture, the requirement for better performing operating systems has also arisen, as has the demand of users to execute heavier programs, especially heavy duty games.

Yosemite, like all other Apple Operating Systems was designed with a view to support only iOS based devices with an exception of iPhones older than iPhone 4s.

Maverick users have the access to the usage of Yosemite on their Mac devices as well.

Special features like the AirDrop Wi-Fi feature which lets users of Mac exchange files with each other and the Continuity features that allow the users to switch over to other iOS devices without having to lose progress on their work session are only two of the many features that make this OS unique. The versions of this OS which have these features are the OS X 10.10 and iOS 8.

The icons in the Mac OS X Yosemite has icons that are not as rounded as those of the previous versions; this has also called for introduction of new fonts, most notably the Helvetica Neue, that add a new look to the icons. Moreover, the translucence of the windows and panels split by grey shades adds a tasteful yet sober touch to the User interface.

Windows 8 on the other hand attracted criticism with the live tile interface.

Although it was a new and unique concept, the lack of the start button seems to have been the source of all the discontent, asides which, there were only a few issues that required urgent attention from Microsoft’s end.

Where Windows 8 allowed you to search for files with a simple search option, Apple’s scope of search was much wider and its search feature, named Spotlight, fared quite well in these regards. The option to search exists in the top right hand corner of the screen. Microsoft, in a major announcement a few days ago, has made the dot net framework an open source.

This has been a major announcement, and latest news from the company suggests that they plan to make the popular service as pen source, and to bring it for Linux and for the OS X too.

This news has however, come in as no major surprise, as it was expected to happen in any way.

Microsoft had, in the month of April, announced that they are going to make a lot of their major technologies as open source.

It was speculated that the ASP.NET, the Roslyn .NET compiler platform, the .NET Micro Framework, .NET Rx and the VB and C# programming languages will be made open source for the use of public at large.

In another major announcement, the company had announced that all these open source technologies are going to come out via a ‘dot net foundation’, which was recently created.

In latest announcement today, the company has released more information about their plans to make the dot net technology open source.

The latest update from the company says that they will be including the .NET Common Language Runtime (CLR), the just-in-time compiler, garbage collector and Base Class libraries.

Microsoft will be working along with their long time partner Xamarin, with whom they have worked in the past to make the .NET technology available in other platforms.

According to Soma Somasegar, the Corporate VP of the Developer Division of Microsoft , this is being done to “bring together the Mono runtime work and our work and converge them over time,” GitHub is being used by Microsoft to port their dot net framework.

However, there are no plans by Microsoft to open source the client side .NET stack, which basically means that certain pieces like the Windows Presentation Foundation (WPF) and Windows Forms won’t be going open source, Somasegar confirmed.

WeChat and Viber are two of the most downloaded apps on the various smartphone markets.

These two Instant Messaging clients have picked up force and are some of the top end applications that the users need for a perfect IM experience and for flawless communication.

They offer a wide variety of functions from crafting innovative ways of creating communications to services such as free calling.

However the feature because of which a majority of the people use these applications are because of the fact that they offer these services – Free of cost.

Users are always price conscious and will not shell out a single penny more than what they should. Ideally they want free stuff. That is exactly what everyone is looking for. Some of the best features that these two apps offer are discussed individually as mentioned below:

Viber: Viber, for the longest period of time has been marketing itself upon the fact that it provides its users with free calling. They saw that the markets were pretty much saturated for the ‘Free IM’ sector as almost every instant messaging application was grappling and wrestling for that spot, they decided to use free calling as their main objective, while also providing their services in texting and various other ways of communication.

WeChat: WeChat on the other hand is your typical IM client with a twist. WhatsApp and other similar chat applications are just ‘chat’ applications, while WeChat adds the elements of proximity, fun and making new friends to it.

WeChat’s sensors connect you to the people geographically located close to you, and you can interact with them. Their ‘shake the phone’ feature is also a very unique an innovative concept. Avast has been one of the oldest names in the world of computing, with their initial projects developed under the name of ALWIL, way back in the year 1991.

AVAST basically comes from AntiVirus – Advanced SeT, which was a program developed by the founders of the company.

The company was originally founded in Czechoslovakia and has offices all across the world.

The latest version of Avast came out on the 19th of September this year, which is being labelled as the 2015 Beta 2 version, is one of the better versions of Avast and offers a high amount of security from various kinds of threats.

Some of the most important features that are offered by Avast are – “intelligent” Virus Protection, Anti-Malware services, SafeZone, Silent Firewall, Anti-Spam, automatic software updater, Access Anywhere, and Data Shredder.

Most of these features are however available for the paid version of avast, but even the basic and free version of Avast offer an amazing amount of security.

Avast is also available as Avast Mac Edition, Server Edition, Distributed Network Manager, for enterprises it comes in Small Business Server Edition, then there is Avast for Linux and UNIX Servers, they have recently entered the mobile phone markets with Avast mobile security, and for the anti theft device protection services, they have come out with Avast Anti Theft services.

As a program which is constantly expanding its markets by spreading their wings into various markets and different segments. Avast has won various awards in the past for their amazing service. Are you an Avast user? You can download latest updates here: http://www.avast.com/en-in/download-update