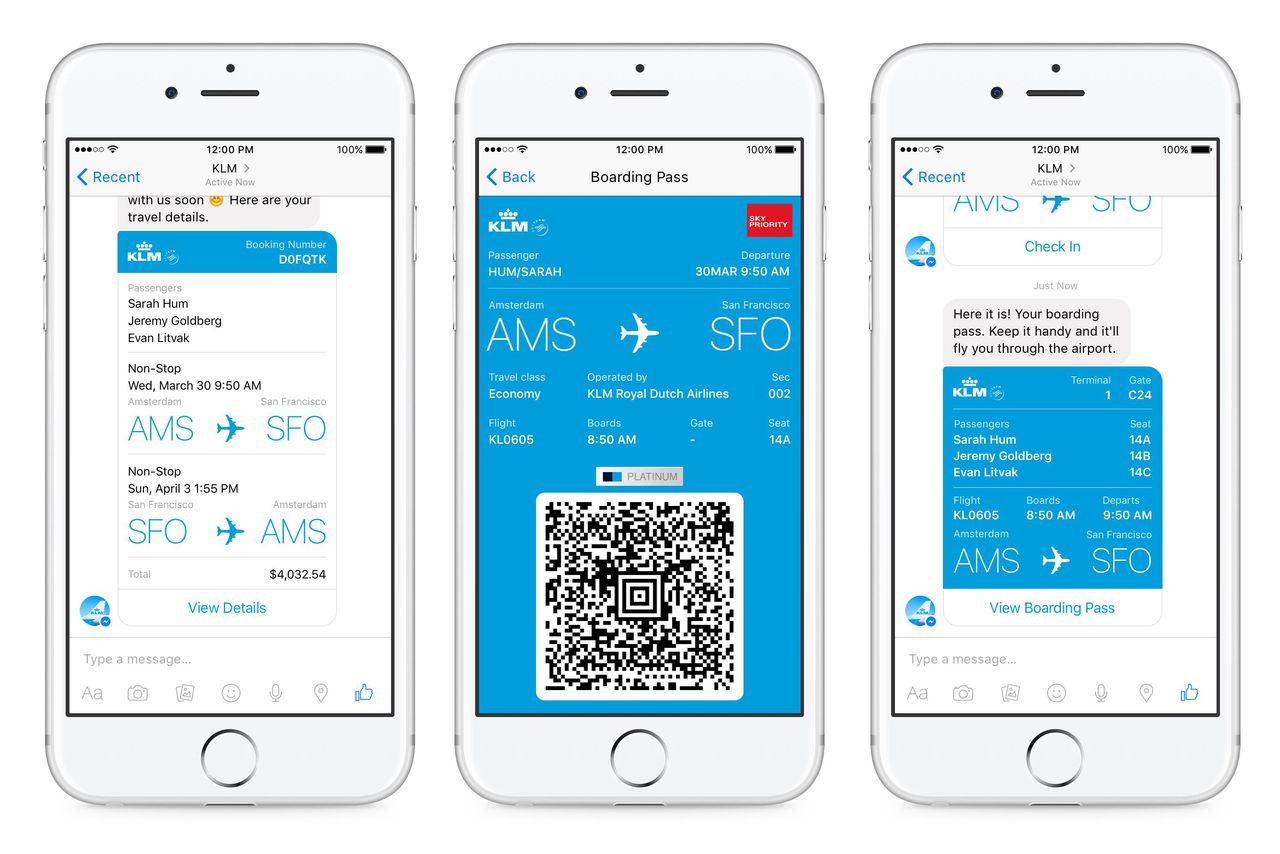 Facebook messenger will now allow people to be able to check there flights details through its application. The Facebook messenger was one of those messengers that was launched way back and has since then grown a lot. Apart from providing uses with a simple way of keeping in touch with Facebook friends, the Facebook messenger is also slowly introducing certain features and aspects that are not existence is in on WhatsApp on telegram. The introduction of video chat on this application also took shape quite a few years ago.

This feature has been designed especially for the passengers for board the KLM Royal Dutch Airlines. For this year lines not just picking you up from the airport is amended comma but checking for the travel availability, the Dutch airlines and rolling out of various face to make customer service better. The vice president for Facebook that is David Marcus has mention very clearly that this was a feature that he had wanted to introduce in Facebook Messenger for a long time. The air travel bookings, getting boarding passes and making updates in the reservations are all going to be very easily and conveniently available to the KLM customers who use Facebook Messenger.

Before starting this venture a proper server was done from the people to enquire how they would react to this particular change once it is introduced. Surprisingly more than 40% of the users had been very excited to try out this feature. Based on this day in introduction of this feature has been taken into consideration. Apart from now only telling the uses about the availability of flights the messengers would also in future be able to provide a user with the relevant flights tickets and also the message for the whole flight booking in a single message.Sono Facebook has been a company which has been around for a short while but has had a massive impact on the world of technology. The company is the name behind some of the most popular apps of recent times, and is probably looking at building  its own ecosystem of apps someday.  The most popular Facebook-made app is that of the Facebook Messenger. With 1.6 Billion Facebook users, 800 million Messenger users, 1 Billion WhatsApp users and 400 Million Instagram users, Facebook is all set to take shake things up in the world of technology. However, Facebook, while it looks at big things, also looks at smaller things.

Celebrating NCAA March Madness month, the company has now introduced an update where the Facebook Messenger now has a hidden basketball game. To play the game, users just need to send the basketball emoji to a friend in chat, and then they will see a basket in the chat Playing the game is quite simple, and as simple as it is, it is also very addictive.

The game involves simply swiping the ball towards the direction of the basket, and every time your ball goes inside the basket, you get a hoop. After you cross 10 hoops, the difficulty level changes and the game becomes slightly difficult as the basket starts moving across the screen.

The updated changelog mentions – “Shoot Some Hoops: Want to see what’s hiding behind the basketball emoji in Messenger? Just send one and tap to find out!”

This is not for the first time that the company has introduced such a change in the Facebook Messenger, as in the past too, Facebook had introduced another hidden game – Chess.

These small changes are what matter the most in the long run, and not only do they help retain the users, but also help increase app engagement, which is what companies these days are looking forward for.

The Facebook Messenger, with over 800 million users, is one of the most popular applications across the world of smartphone devices. The app has been used by users across the planet and has many features, and with every update newer features have been added to the application. The latest update to the Facebook Messenger has now given the users a hidden game! Facebook has a hidden basketball game in their messenger, and here’s how to play it –

In the update that came out on the 16th of March, Facebook had mentioned in the changelog that the users can now ‘shoot some hoops’. That seemed quite ambiguous for a while. However, the Facebook Messenger now has a hidden game in it. In order to access this game, users just need to send someone the basketball emoji, after which users will be prompted with a basketball which the users have to flick inside the hoop. The game is very simple and very addictive at the same time. The game is all about beating your own personal high score. It simply involves swiping the ball towards where you want to throw it. If the ball goes in, you get a hoop, if it does not, you get a crying emoji.

Users who miss it will have to start the game all over again. Beating your best score shows you an updated number in ‘current best’. There are no scoreboards, but users can always take a screenshot!

The updated changelog mentions – “Shoot Some Hoops: Want to see what’s hiding behind the basketball emoji in Messenger? Just send one and tap to find out!”

Difficulty levels too vary, as after you hit 10 hoops the basket will start moving across the screen making it tougher for you to get a hoop thereon. The game has been timed to come out with the NCAA March Madness.

Microsoft has been a company which has been trying their best to work on developing their latest OS, the windows 10 further into the markets The company has billed the operating system as the last Windows OS, and the company is working harder towards ensuring that this is something that can last them for a lifetime. The company has been pushing their devices forward rather heavily, and the next major step towards development is getting more apps on the platform. New leaked screenshots have now shown that Facebook Messenger for Windows 10 OS might soon be coming out.

The fact that a Facebook Messenger for Windows 10 is being built should not be much of a surprise for many as this has been in the news for quite a while already. When Microsoft released the Surface devices and the Lumia 950 back in the October of last year, they talked about Facebook building universal apps for Windows 10 OS.

The list of features described by Windows Blog Italia are:

Facebook has officially confirmed this by stating “We’re testing Messenger for Windows 10 to a small percentage of people in a few countries.”

According to a leaked document obt ained via Tech Crunch, it has been observed that Facebook intends to release ads in Facebook Messenger by Q2 of 2016, which is in the coming few months.

These ads on Facebook Messenger will be able to be sent across to the users who have opened a chat thread with the company in the past. This basically means that pages will now be able to send ads to the users directly on to the messenger if they have opened a chat thread in the past. Interestingly enough, Facebook has also launched a URL shortener for such threads ,which is www.fb.com/msg/

When Facebook was approached over the same, they had commented by saying “We don’t comment on rumor or speculation. That said, our aim with Messenger is to create a high quality, engaging experience for 800 million people around the world, and that includes ensuring people do not experience unwanted messages of any type.”

However, how and when it will be implemented would be quite a while. The world of technology is yet to witness these kind of aggressive advertising efforts, and it is expected to be quite a subtle and indirect form of ads, as users would not prefer ads being thrown at them via various pages. Costs associated with it are also unknown at this point of time.