We always knew that using Twitter would be great fun but having it worked as an expert photo editors means a completely different thing all together. Twitter has now begun a new feature by which you can make your normal photos even more fun by adding # stickers and emoji. A size they would be a lot of other tools available for anything as well so when your photos finally get uploaded to the social network, it would radiate joy and show people your creativity or your humour streak. 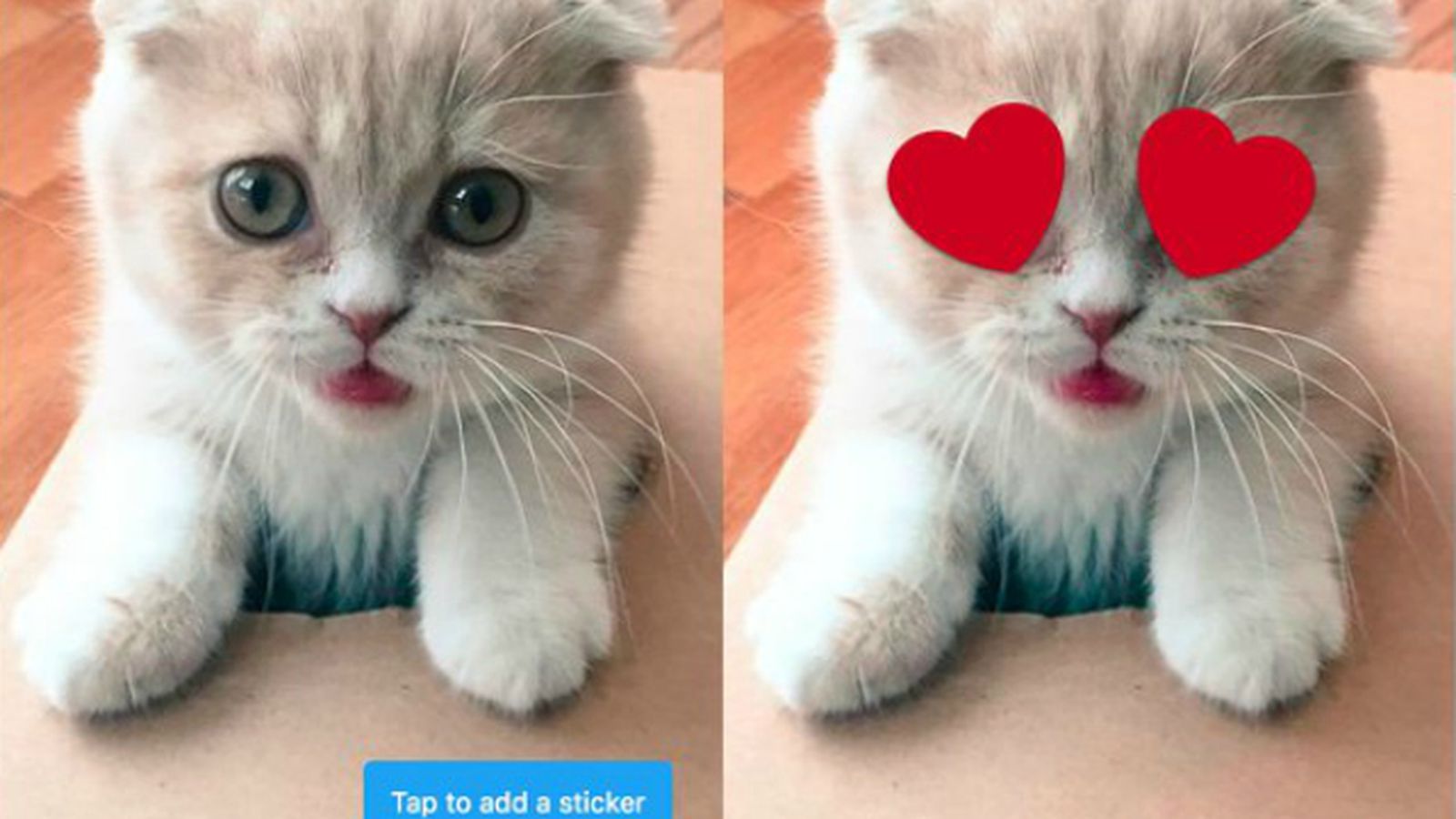 At the moment this feature is still under development but it would be rolled out for the iOS and Android users in the next few weeks. The application developers have reportedly added a lot of features to make your photographs even more fun. Apart from the emojis, even the stickers that you want to update would encompass a lot of categories just like the emojis have access to accessories, animals, food, flags and day to day life emotions. Other simple photo editing features like filters, dad, cropping and other colour adjustment options will be available on the website.

To tell you a little more about the sticker options we have done a little bit of searching among the various blogs and the other Twitter posts that have been flooded by the developers on the website. The Line Sticker options would generally cover life events as well. A recent report says that world events will also be covered in these stickers. You can not only add them to your pictures but can also edit them by resizing, rotating and replacing them anywhere on the image.

Probably the most interesting part of the stickers are that they can be searched before you add them. You will have a number of options available and you can choose from hundred the stickers available online to choose the best one for your image. If you see any interesting sticker Centre head by a friend of yours so you see it in a public treat you can always search for these stickers and have them added to your following Tweets.

E3 2016 has launched a lot of games but we have made a few of our own choices based on the ratings of the games on the Internet.

Which one is your favourite from this list let us know in the comments below.

The world of technology has always been a place where investments play a big role. There are many services which have grown in manifold and have helped the investors gain big money. Twitter, as we know it to be, is a giant when it comes to Social Media, and the company has been increasing and expanding at a rapid speed. The company has now confirmed the fact that they have invested in SoundCloud back in the month of January. SoundCloud has been a popular platform where many composers have been sharing their tracks and it has been growing in stature off late. Twitter had a keen eye over this, and their investment is a big help to SoundCloud.

“Earlier this year we made an investment in SoundCloud through Twitter Ventures to help support some of our efforts with creators,” Twitter chief executive Jack Dorsey said.

While the company has not disclosed the exact amount of their investment, according to reports from RE/Code, the investment is somewhere around the tune of $70 Million.

SoundCloud, a platform that enables people to upload and share music and other audio files, also confirmed that Twitter had made the investment. SoundCloud had been going through a major round of funding where they have raised a total of 100 Million dollars. It has been expected that the company stands in at around $700 Million at the moment.

It is also worth noticing that Twitter has had a connection with music since quite some time, as in 2013, the company tried experimenting with their music service, Twitter Music, which eventually shut down in the year 2014. Back then, the company had said that they will be looking forward for ways to bring more music based content into their service.

The Samsung Gear fit 2 smart watch is taking up a lot of compliments from users who have bought the watch or have at least seen their friends using it.Priced at 179 US dollars the Samsung Gear Fit 2 is taking the world by storm with its slim looks and its wonderful functionality. The device suffers stiff competition even now at the hands of bigger names in Android wear like Fitbit, apple watch, Microsoft bands true and other such devices but it has still managed to put up a great looking device with better features than what it provided before in its previous version.

It does away with the monotonous silicone band that every fitness what has and replaces it with a simple snack in design which comes in various sizes to Cater to the needs of various people. Not only is the watch easy to put on, it is also very simple to use it. We definitely do not claim that it is a very fashionable looking watch but the kind of price and the kind of functions that it comes with definitely gives it a better score as compared to its rivals that have been mentioned earlier.

Slender strap is not the only attracting features in this watch point there is also a beautiful display which is quite small and is surrounded by a large Basil which makes the watch look even better. On the downside the people are not very happy with the pinch and slide type of clasping Technology and the bottom of the watch is quite circular because it has a lot of a  skin sensors on it to give you accurate results.

The watch will come in three colours that is black, blue and pink. The screen is bigger as compared to other smart watches that is competing against. The screen is 1.5 inch super AMOLED type and functions with the help of a one gigahertz dual core Exynos processor. It is set into work with the help of a 512MB RAM and for storage purposes you can get  4 GB storage.It comes with an array of sensors including GPS, accelerometer,  gyroscope, barometer and HRM. It runs on the Tizen operating system. 200m ah battery power set up and help it last for 2 days running constantly. Of course it would work with any Galaxy smartphones or an Android device that works with KitKat 4.4 or above. Since it is made for those who are quite active it would come with an ip68 water resistant system. Sleep tracking, calling, texting, calendar and other social media notifications will also be available on this device.

We all know that Microsoft Xbox One and Windows 10 have boot completed quite a lot of time in togetherness. Now that we are celebrating their anniversaries the Xbox one has managed to come up with some really intelligent features that will be able to make Cortana and Xbox One a better experience with the Windows 10.

Microsoft is trying is the best to bring about a consensus between the PC platforms and the Xbox platform. It is making the Xbox one accept Windows 10 and its features and at the same time it has introduced and xbox application for Windows 10 which again is struggling to meet up the Expectations. The applications will be good enough to not just give you a good game play experience but will also enables you to record the games from the game bar @ 60 frames per second and you can also share your game play clips with your friends on Twitter which is a really good deal for those who are avid gamers.

Along all the important updates that are going to be received by people using the Xbox one and Windows 10, you are going to be able to see Cortana in its most advanced form and the good news is that it would be available to Xbox uses as well. With her health uses will be able to not just have their errands run faster, but will also be able to share the again sweater with improved sharing through a better give connection tab. You will also be able to discover who among your Facebook friends is playing the same game as you are. Also Cortana will assist you to be able to invite friends to game parties and also run some functions while you are playing games. Of course Xbox One uses need to realise that quote and I will not be able to function the same way like she functions in a computer. The best part of it is that you would not need Kinect to command her any further.  Merely a headset would do.

Microsoft has been a company which has been the name behind some of the biggest innovations when it comes to the world of technology. The company has been coming out with a large number of updates and upgrades, and has brought in major changes in the way we know the markets of technology to be. Over the past several years, there have been many changes which have been many changes in the markets, and following the trends of the times, Microsoft, too, has now been coming out with their hardware devices. The next big hardware release from the company is expected to be that of the Surface Phone. The Surface Phone has been anticipated to come out since nearly a year now, and it has been reported  that the device is currently under development under the codename ‘Juggernaut Alpha’.

Microsoft is expected to have this Surface Mobile device come out in three variants, based on the RAM and internal storage – The basic 4GB RAM with 64GB storage, the advanced 6GB RAM with 128GB storage and the high-end 8GB RAM with 512GB storage variant.

By the looks of the specs, the device is so powerful that it can actually give some of the modern day laptops a run for their money.

Microsoft has been anticipated to release the Surface Phone in the March of 2017. Earlier it was expected that the phone would be coming out in the October of this year, but the release date has now been pushed to March ’17.